Art in Focus: The Past is a Foreign Country by Anita Groener (2018) 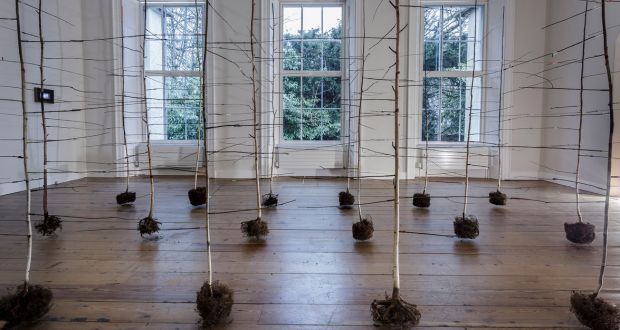 The Past is a Foreign Country (2018) by Anita Groener, installed in The Dock, Carrick-on-Shannon

An installation that forms part of an exhibition by Anita Groener.

How was it done?
The installation is the centrepiece of Groener’s exhibition of the same title. It consists of 20 birch stems, shorn of branches and leaves and uprooted, suspended from the ceiling in a grid pattern, a stark metaphor for the experiences of people forced into migration, dispossessed, corralled in miserable detention centres, their validity denied. Other components of the exhibition include Moments, animated line drawings based on the testimony of children caught up in the horror of war in Syria, made in collaboration with Syrian journalist Razan Ibraheem. How Fragile We are is a three-dimensional grid of painted twigs with miniature cut-out figures negotiating their way through its layered spaces.

Where can I see it?
The exhibition was originated by Una McCarthy at the Limerick City Gallery of Art last year. It has since toured to The Dock in Carrick-on-Shannon and is now on view at The Lab in Dublin until July 27th. From the end of August it will be at Uilinn, the West Cork Arts Centre, Skibbereen (August 31st-October 12th). dublincityartsoffice.ie/the-lab

Is it a typical work by the artist?
In one sense it is typical, in that we see Groener trying to devise an innovative means, an artistic language, to address broad areas of experience. But she has never settled into one formal language or style, even as her preoccupations and her artistic sensibility have gradually come into focus and been more and more clearly articulated over several decades.  Groener was born in Holland. She studied art in Tilburg and Arnhem and then came to Ireland. It was to be a temporary move, but in the event she settled and stayed. Initially she was associated with a number of figurative painters who emerged from the early 1980s onwards, including Patrick Graham and Eithne Jordan. Gradually, her spare, at times austere aesthetic sense came to the fore, as though she were dispensing with the non-essential elements of her work. It was an instinctive process that had a great deal to do with her own life experience: becoming part of another community and society while retaining strong family links with home, together with questions of belonging and travelling between cultures, becoming a mother and realising her own artistic priorities.

For some time prior to the calamitous developments that created the refugee crisis in the Mediterranean, Groener had been applying herself to dealing with collective rather than simply individual experience. So it was entirely natural that she should feel impelled to respond to immediate events on a historic scale.
https://www.irishtimes.com/culture/art-and-design/visual-art/art-in-focus-the-past-is-a-foreign-country-by-anita-groener-2018-1.3897445